One of the many contacts we made during our Centennial year was with the Hobbs family in Gabriola Island. Dave Hobbs was able to give us valuable information about his mother whose fascinating association with the Island Arts and Crafts Society and the reborn Victoria Sketch Club spanned over half a century.

Isobel Mary Oldfield was born in Ashill, Norfolk, England, in 1885. Both her parents were artists, and she achieved an art teachers’ certificate at the South Kensington School of Art, London. She became proficient in a wide range of media, including oils and watercolour painting, stained glass and ceramics. Additionally, in 1913, her pencil sketching prowess won her an Award of Merit in a British national competition.After teaching in England, sh 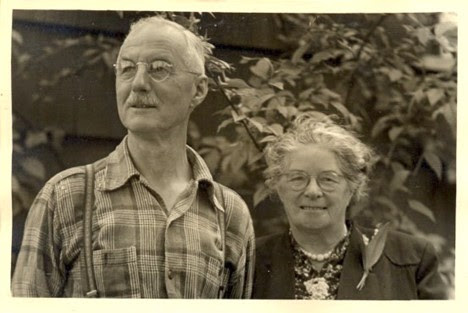 e came to Victoria on a visit in 1914. Unable to obtain a teaching post without a Canadian degree, she took a job as a companion-housekeeper, and during this time met her future husband, Captain S. Morgan Hobbs. The couple were married at the end of the World War I, and moved into James Bay where they met their intriguing neighbour who ran a rooming-house called “The House of All Sorts.” This was Isobel’s introduction to Emily Carr, with whom she was to establish a life-long friendship, and during which time they combined to write “The House of All Sorts.”As her children grew, Isobel found time for painting classes and formed another friendship with Josephine Crease, an established artist. It was in 1919 in the gardens of “Pentrelew,” the Crease family home, that Susan Crease introduced Isobel as a prospective member of the Island Arts and Crafts Society to its President, Dr. Edward Hassell. The new bride from England became a Society member the same year.Isobel wen

t on to be a frequent contributor to IACS exhibitions up to 1941, and was to acquire the name of “The Dogwood Lady,”  perhaps because of her botanical interests.  She displayed her work at the Vancouver Art Gallery exhibitions in 1933, 1939 and 1945, and enjoyed a solo exhibition in Victoria in 1938. 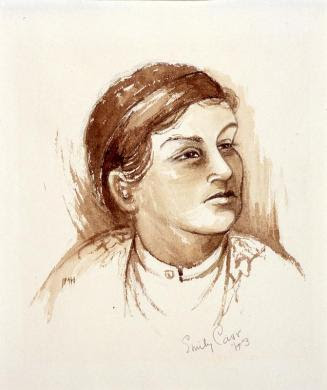 Isobel was noted for practicing an “oil on wood” technique, allowing paint to run through the grain of wood panels, although she was also a very capable watercolourist and sketcher. Her dogwood paintings became widely renowned, and a sketch of her friend Emily Carr was signed and donated to the Art Gallery. Her friendship with Emily never faltered, although she portrayed the great lady as “very kind-hearted with a terrible temper.” Their incessant arguments about painting wildlife could reach levels of high comedy. Isobel had an impression of peace and quiet in the woods and took issue with the Emily’s penchant for “painting trees on the move.”  In 1944 Isobel joined Ina Uhthoff and Will Menelaws in piloting efforts toward the “Little Centre,” a step towards the establishment of a permanent art gallery in Victoria. Isobel had sat at the bedside of Emily during her friend’s last days in 1945, who fittingly sent a letter to the group praising them for pursuing a cause which had always been close to her heart. Isobel acted with other IACS veterans in beginning life anew with the Sketch Club in 1952, and she was made a Victoria Sketch Club life member in 1967. As octogenarian, she was unable to paint due to a state of near blindness. However, she had developed finger painting to a fine art and was awarded a solo exhibition at the Art Gallery of Greater Victoria at the behest of its first Director, Colin Graham.Isobel Hobbs spent her final years in Nanaimo, where she died in 1974.
- December 03, 2022 No comments: