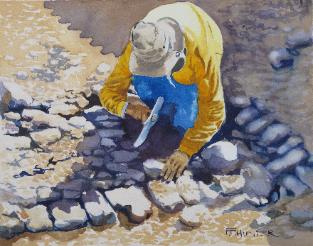 The Victoria Sketch Club is the oldest Canadian art group west of Ontario.  It was formed in 1909 as The Island Arts Club, comprised of 56 Charter Members including such famous names as Samuel McClure and Emily Carr.  Renamed The Island Arts and Crafts Society, the club dominated the local arts scene throughout the inter-War period.  By 1935 it was the largest group of its kind in the country.  In addition to Emily Carr, leading artists included Max Maynard, Jack Shadbolt and Ina Uhtoff.  Click Notable Member to see some past notable members.

From the outset, the society chose to simulate art expression through the Sketch Club in which art lovers could meet with kindred spirits to draw and paint together.  As an official component of the Society, the Sketch Club offered a summer program for outdoor drawing skills which was seen as a chance to hone skills gained with models and still life during the rest of the year.
In 1952, the Island Arts and Crafts Society became know as The Sketch Club, subsequently taking the title of Victoria Sketch Club (VSC) at the suggestion of Colin Graham, curator of the Art Gallery of Great Victoria at the time.  The revitalized body adopted a format still clearly recognizable today with an annual residential paint-out added to the well-established annual exhibition and indoor winter and outdoor summer programs.

The Club takes pride in its long history and welcomes new members both to maintain its traditions and bring in new energy, ideas and artistic styles.  Notable additions in recent years have included John Climer, an established name in Canadian art, and Ted Harrison whose unique vision and portrayal of norther Canadian life has received international acclaim.

The objective of VSC continues to foster and encourage the work of its member through co-operative and self-sufficient programs such as the annual Victoria Sketch Club Show at the Glenlyon Norfolk School.  Many members also contribute to the variety and richness of the local art scene with members participating in the shows and activities of many other groups and organizations.

A fuller account of the Club's history can be found in John Lover's 2008 book, The Victoria Sketch Club; a Centennial Celebration which was published for the Centennial year.  Copies are available by emailing the Club Executive at victoriasketchclub@gmail.com