Thomas William Fripp was born in London, England, in 1864.

Born into a family of artists steeped in the romanticism of British watercolour tradition, Fripp studied at St. John's Wood Art School and the Royal Academy School in London from 1883 to 1890.  Fripp immigrated to British Columbia in 1893 and pursued life as a farmer until 1904, when he returned to watercolour painting on a permanent basis.

He was one of the first European artists to make a permanent home here, becoming fascinated with the formidable scale of the rugged Canadian terrain and spending many summers in the mountain passes and on the glaciers.

Although he is rated as a traditionalist in the field of landscape art, he did attempt to adjust his style to do justice to his new surroundings without achieving the innovation later achieved by the Group of Seven and Emily Carr.  However, his work was popular, and he was one of the few artists in the province able to make a living from painting.

He was one of the principal founders of the British Columbia Society of Fine Arts in 1908, along with Scotsman John Kyle, and served as its president for many years.

He was able to re-connect with Kyle and other British trained artists following the formation of the Island Arts and Crafts Society in 1909, and was a regular exhibitor at its annual shows between 1912 and 1930. In 1927 one of his works was purchased by the Randolph Bruce, Lieutenant-Governor of BC.

He remained active in the local arts scene until his death in Victoria in 1931. 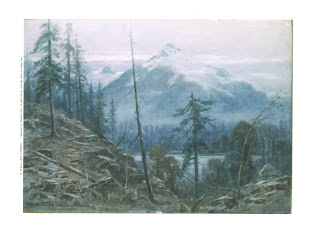