Maude Lettice, whose association with the Island Arts Club and its Sketch Club successor spanned some 60 years, can safely be recognized as our longest-serving member, and as one who played a pivotal role in bridging the transition from one version of our club to the next.

Her father Robert, a mid-century emigrant from England, arrived in Victoria in 1862 and established a successful business. The Lettice family first resided in a house in Broughton Street surrounded by orchards, where Maude, one of six siblings, was born in 1879. Later, Robert commissioned a residence, Yaxley, in Faithful Street, which was built in 1916. 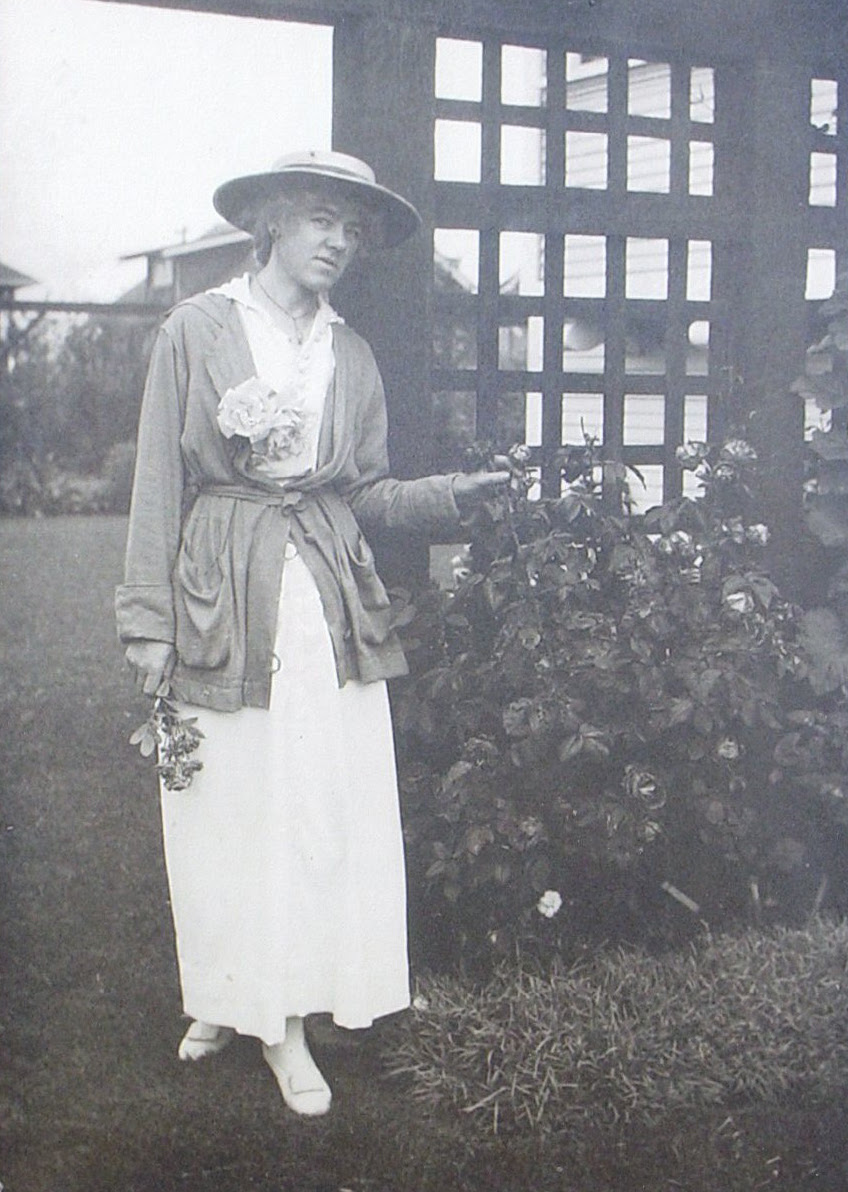 After leaving school Maude studied art under Miss Woodward and John Kyle, and became a friend of Josephine Crease of Pentrelew, a charter member of the Island Arts Club, later the Island Arts and Craft Society (IACS), of which Maude was soon to join and establish the unique record of contributing to every annual exhibition from 1910 to 1941, and again in 1947.  Her early paintings were created in traditional British watercolour style, with fine detailing and smooth application of colour. However, Maude showed open-mindedness in adapting her style to incorporate more modern techniques, such as those exhibited in the “Modern Room” component of the 1932 exhibition of the IASC. Indeed, according to Emily Carr’s biographer, Hembroff-Schleicher, Maude subsequently developed a more impressionistic style, larger in format and with brighter colours and more freedom in her brushwork. 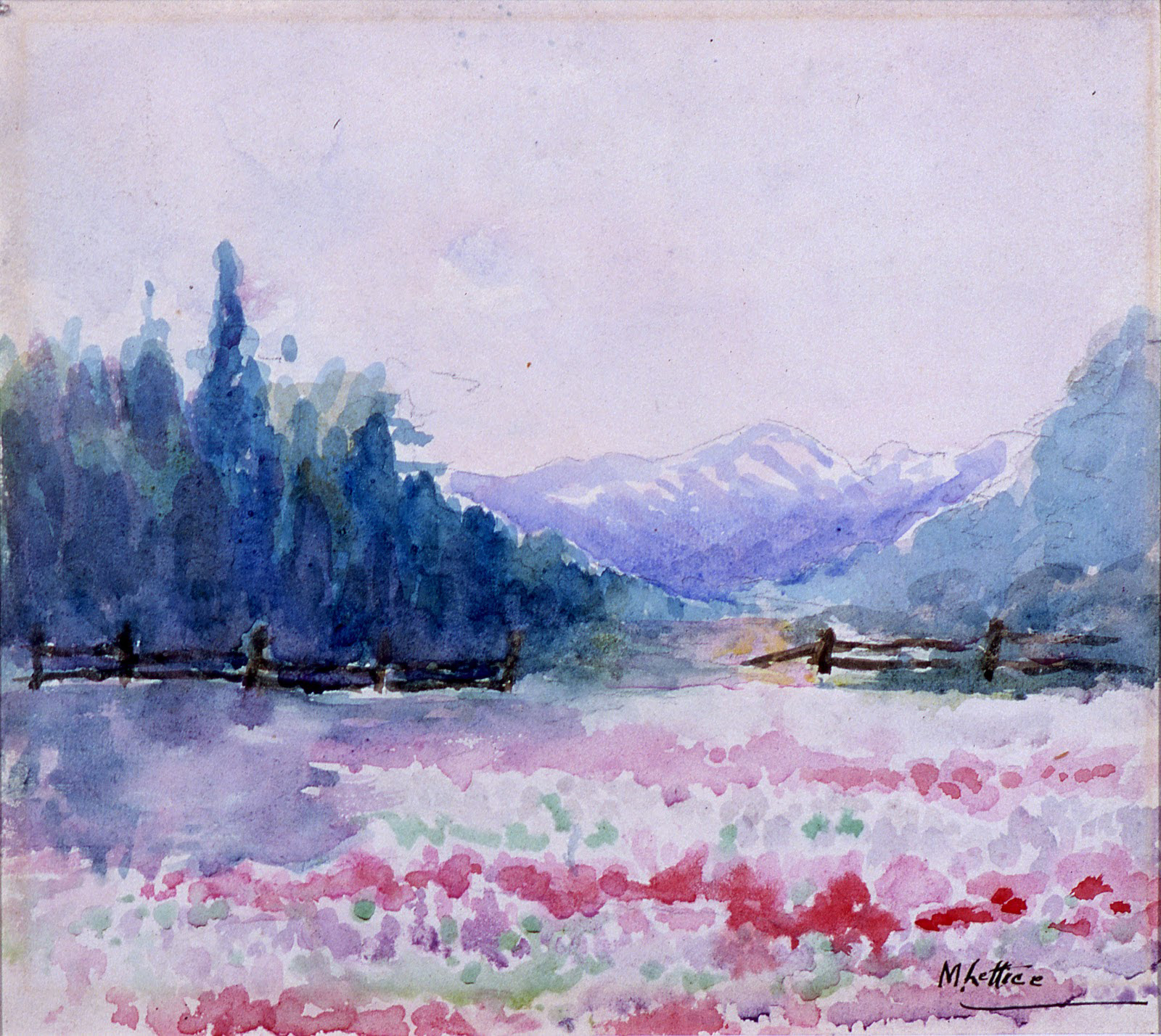 After World War II, lessons from Amy Stone of Toronto again persuaded Maude  to change her painting style, only abandoned late in life due to failing eyesight. She was a long-time member of the executive committee of the IACS, chaired the seminal meeting in 1952 when it was decided that the Arts and Crafts Society be known as the Sketch Club, and was elected President of what had become known as the Victoria Sketch Club in 1958. On the occasion of the Club’s fiftieth birthday in 1959, Lettice was made a life member in appreciation of her service, and the Club presented one of her watercolours, painted at Saxe Point, as a gift to Government House.  At the Club’s 1971 annual exhibition, there was a display of 14 pictures of the 92-year-old veteran. Maude, a member of both the Vancouver and Victoria art galleries, having exhibited in both, died in Victoria in 1976. Her paintings have been hung in galleries in Victoria and Vancouver and private exhibitions in Toronto and Halifax. On a personal note, while researching for the Club’s history book in 2008, I had the good fortune to visit Yaxley the Lettice family home, and meet Maude’s niece, the charming Evelyn Lettice, who was in the process of leaving the house in which she had spent all of her 88 years.  Evelyn, had spent her entire working life in administration at Esquimalt Dockyard and achieved distinction at a range of sports, including an appointment as a national ice-skating judge.  She was happy to share a host of memories about her aunt and past personalities in the Victoria art scene and was able to attend our History Book launch at Abkhazi Gardens later in the year.  We were able to renew acquaintance sometime later when some of our Club members participated in an art show at Somerset House, the Senior Care Home, w 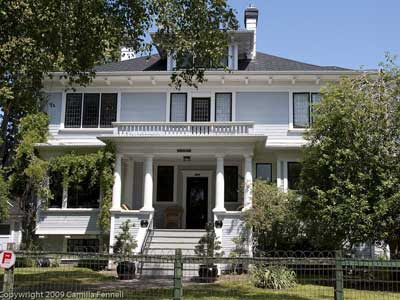 here we were joined by Evelyn, now a resident there.  Evelyn passed away in 2012, and, interestingly, in 2018, Yaxley, the former Lettice family home, was to achieve heritage status as a fine example of an Edwardian era Georgian Classical Revival building. Illustrations:Maude Lettice, photograph, Collection of Evelyn Lettice
Maude Lettice, Summertime Near Victoria, B.C.
Yaxley, the Lettice family home
- December 26, 2021